Habit, Thou Art The Enemy

If you asked me on March 31 what I thought would be the biggest stumbling block to giving up sugar, I would not have told you the right thing, because I would not have guessed back then what it was. My thought was that to change my eating habits would involve mostly willpower, and the strength to resist the sweets that were available. I have posted on just about every occasion that I was tempted like that, look through the archives. Sometimes I made it, sometimes I succumbed, and it turns out that these events aren’t that frequent, or that important in the overall life change.

Actually, the biggest deterrent to consistently eating healthy day in and day out is my limited imagination. Cooking used to be, “what’s for dinner” meaning what meat do we thaw out. You know, meats and fats aren’t the problem, so we haven’t had to change the process at all as far as the main entree goes. No, the problem is that now we have to think “What goes with that, that we want to eat.” In the past we could just cook potatoes in one of their many forms, fried, mashed, boiled, baked, broiled…that was the go-to ‘I’m too lazy to give it more thought’ side dish. Meat, potatoes, and cottage cheese–if you ate with us, you had that very meal, probably 75% of the time.

Perhaps in your house it is “let’s see whats in the freezer” where there might be some Tater Tots, maybe some frozen fries. Maybe you would go to the pantry and break out the Kraft Macaroni and Cheese. Maybe you would make a Hamburger Helper. Opening a can of green beans or corn, put some butter in it (or -gack- margarine) and a little salt. Dinner. If you have to give it much thought, well, why give it much thought! The kids will eat this, it’s filling, and before we cared about sugar and starches, at least it’s not fast food.

So, now that kind of thinking is out the door. We have to think about side dishes that don’t hurt us with easy starch or sugar, because we really don’t need them at all. It turns out that side dishes can be just as quick the new way as the old way, but we just need new arrows in our quiver, new go-to’s that come immediately to mind.  I am here to help. Today’s post will be all about the fast, healthy side dish, things that go with anything, are filling, and take just minutes to get ready–if you are ready with the supplies in your cupboard. No pastas, no sweets, no breads, no starches in this list.  Here we go.

The first and best of the bunch vegetable for side dishes is cabbage. There are several kinds of cabbage you can get for this job, napa, bok choy, green, red…it doesnt matter at all, you should get whatever is least expensive the day you are at the market. Any of the following cabbage dishes will be WONDERFUL with whatever cabbage you have. You just have to have a head or bunch of cabbage in your fridge so that you can make it quickly.

One thing to try very soon is buttery dressed cabbage. The best way to make it is to cut the cabbage into ribbons.  How much to make? Realize that it will look like a whole bunch of cabbage until it wilts, then it wont look like enough. A little bit goes a long way, but for each couple of diners you probably need to make a quarter of a head of green cabbage. Put your biggest pot on the stove and get the water boiling, put a tablespoon of salt and sugar in the water, boil the cabbage for about two minutes. If you over cook it it’s ruined, so just two minutes then strain it out and cool it off in the sink. Two tablespoons of butter in a skillet, a teaspoon of caraway seeds, and about a half cup of seasoned croutons, pulverized, and brown that until you can smell the caraway warming up. Mix in the cabbage.  This is your side dish.  Here is the recipe. 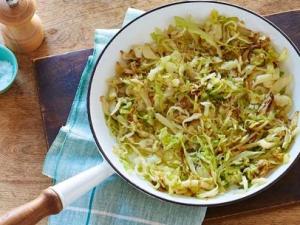 Cabbage also works really well if you put some salt and olive oil on big slices of it and broil them in the oven until they begin to burn on top.  That burned part adds a lot of flavor, and you can spice them any way you like.  Super quick and super good to have in your plans. Also you can try chopping cabbage up and frying it with some garlic and other spices, use a flavorful oil like bacon grease or lard, olive oil works too, and you won’t need to throw any meat into this side dish.  Literally ten minutes, tops.

Fresh green beans are also a terrific go to if you are short on ideas. Try just melting some butter or ghee in a skillet, and cleaning up some whole green beans (stems off) and toss them in.  Move them around every so often, when they start to leave brown stuff in the bottom of the pan, deglaze the pan with some chicken stock, put some sesame oil in there and some sesame seeds. You will not have leftovers of this side dish. Here is one way to do this… 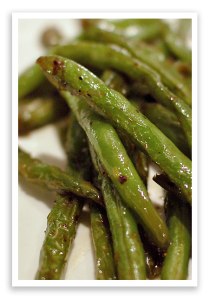 You can essentially do the same thing with asparagus, but it works best if you blanch these in boiling water like you did the cabbage, because the tips will burn before the stems are fully cooked if you aren’t very careful.  Just don’t overboil because they are not very easy to fry if they are falling apart mushy. 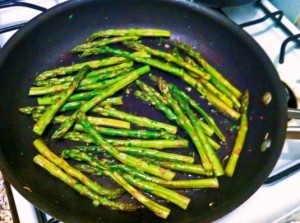 You might look up some other vegetables that we are just now beginning to experiment with. Fennel is very good, looks like a cross between a green onion and a celery. Root vegetables are really good, like parsnips, and turnips. You have to get past those nasty names, but the vegetables themselves have been around for thousands of years for a good reason. Probably the only reason you haven’t eaten them more often is that Del Monte doesn’t put them in a can.

Salads have got to be mentioned here. If the dressings that you put on yours come out of a bottle, they are about half the quality of what you could, in seconds, produce for yourself. Who knows how to make Buttermilk Ranch dressing at home? I will tell you…it’s essentially two ingredients…Mayonnaise and buttermilk. Equal parts of mayo and buttermilk, season with salt and pepper. Every time I see a bottle of ‘buttermilk ranch’ dressing it makes me laugh. There is no way to make it without the buttermilk. Why not call it ‘Mayo Ranch’.  Just sayin’. How about Russian dressing? It’s Mayo and Ketchup. Equal parts. No added ingredients to make it last a million years in your fridge. No bottle to throw away half used months from now.

Maybe in another post I will show you how to make your own mayonnaise at home.  Come back later on and see.

I am an instrument technician at the electric utility servicing the Kansas City Missouri metropolitan area. I am in the IBEW, Local 412. I was trained to be a nuclear power plant operator in the USN and served on submarines. I am a Democrat, even more so than those serving in Congress or the White House.
View all posts by dcarmack →
This entry was posted in Uncategorized. Bookmark the permalink.