A quiz for frequent readers of this blog. 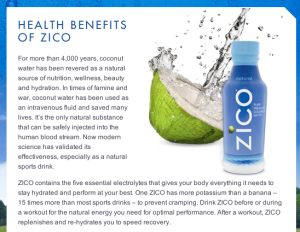 A. An ad for a health food that has miraculous properties

B. An excerpt from an article in theonion.com magazine

C. A debunked health claim that one company agreed out of court to stop making.

The correct answer is “C”. However, if you go to the internet right now, and search for the health benefits of coconut water, you won’t get any of the truth on the subject, you will get the story that Dr Oz put out earlier, and all of it’s echoes on the internet. The internet is like a still pond, and when a nugget of ‘wisdom’ is tossed in, the ripples never subside. Any attempt to still the waters with truth cannot compete against all of the ripples and reflected ripples. The water is never again still.

Here is the news of the debunking of coconut water’s natural miracle qualities. New York Times.

Vita Coco, a leading brand, once boasted that it had 15 times the electrolytes — substances like sodium and potassium that are lost in sweat — in sports drinks. Then a 2011 class-action lawsuit contended that some of the mineral sums on its packages were exaggerated; as part of a settlement, Vita Coco agreed to stop saying that it rehydrated better than sports drinks. “We don’t try to compare ourselves to much of anything anymore,” said Arthur Gallego, the company’s publicist.

It is nice of them to quit making the claim. They don’t have to. We won’t find out that the claim is gone. Once it has been made, forever more the public will think of coconut water as a health food, better than water or sports drinks. No matter how loudly the truth is shouted now that it’s no better than water at rehydrating, there will be people who spend the extra for the miracle water found for thousands of years in the modest coconut.

Although I have never bought coconut water, if I ever did it would not be because it makes any claims to healthy properties or miraculous results on the label. Health claims on a label are reasons why I do NOT purchase a food. More generally, I don’t purchase foods in boxes, bags or bottles. I have, in the past purchased whole, real coconuts. I broke them open with a meat cleaver, harvested the meat and made coconut oil from it. Pain in the butt, can’t recommend it at all. It’s way easier to get virgin coconut oil already extracted for me. I guess that violates my self-imposed prohibition on buying in bottles, but there you go. Virgin coconut oil is a healthy oil, and I recommend it. If you make your own, you have my respect.

When I busted open my coconuts, I threw the water away.

I am an instrument technician at the electric utility servicing the Kansas City Missouri metropolitan area. I am in the IBEW, Local 412. I was trained to be a nuclear power plant operator in the USN and served on submarines. I am a Democrat, even more so than those serving in Congress or the White House.
View all posts by dcarmack →
This entry was posted in Health, Living and tagged class action lawsuit, coconut water, health claims, health food, new york times, quiz. Bookmark the permalink.