Lake Erie is enjoying a terrific growing season …for algae. 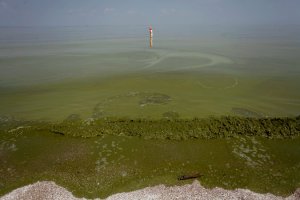 Toledo, Ohio had to stop making drinking water recently, because of the ‘bloom’ of a form of algae that gives off a toxic waste product, which can’t easily be gotten out of the water by the water treatment plants. This algae is blooming because of phosphorus from farms in the Midwest. The phosphorus runoff is greatest from conventional farming, but also occurs from no-till farming, where fertilizer and herbicides are sprayed right on the ground and not mixed into the soil by tilling. Not having to till the soil saves the farmer from making expensive passes on the farm with his tractor, but no matter what, rainstorms in the spring can cause some of the chemicals to wash into the rivers and lakes.

These algae blooms are becoming a problem all over the Midwest.

But while there is talk of action — and particularly in Ohio, real action — there also is widespread agreement that efforts to address the problem have fallen woefully short. And the troubles are not restricted to the Great Lakes. Poisonous algae are found in polluted inland lakes from Minnesota to Nebraska to California, and even in the glacial-era kettle ponds of Cape Cod in Massachusetts.

Five years ago the EPA put out a report that called for urgent action to bend the curve on phosphorus runoff. In their report they analyzed the sources of nitrogen and phosphorus found in the Gulf of Mexico. Eighty percent of the phosphorus was from farming. Seventy percent of the biological nitrogen was from farming. The algae bloom in Lake Erie and in our nation’s lakes and rivers are likewise directly related to modern industrial farming practices. From the report:

In contrast to the 18 million tons of human fecal material treated annually (based on Freitas Jr. 1999; MERCK 2007) at POTWs, animal agriculture production results in the generation of more than 1 billion tons of manure each year (based on Brodie 1974; Chastain et al. 2003; USDA 2009a; USDA 2009b; USDA 2009c; USDA 2009f). This manure results in over 8 million pounds per day of nitrogen and 3 million pounds per day of phosphorus. Much of the manure is applied to farmland as organic fertilizer for crops. Some of the nutrients in this applied manure end up in harvested plant tissue, but significant portions end up in our nation’s waters.

This report went on to list the existing ways that using the existing laws the problem of phosphorus and nitrogen runoff can be controlled. None of this looks promising, especially considering that to increase enforcement would increase government expense to do so. Spending more government money on this might be a terrific investment in our national future, but you have to convince at least ten Republican Senators to vote this way. Let’s discuss other, more realistic options…

Growing nothing but corn and soybeans, mostly to feed our feedlot meat supply, is killing us in numerous ways. Greenhouse gases are created by the animals, by making their feed, by making the fertilizer to make their feed. The warming atmosphere and torrential rains from the changing environment wash the fertilizers into the water supply, where it is converted by dangerous algae into toxins that are difficult to remove from the water. Algae kills the fish in the ponds and lakes by consuming all of the oxygen in the water as it decomposes when it dies. The toxins kill us.

The sad thing is, we don’t need all of that corn and soy. Producing so much of it has the effect of keeping it’s price low. The low price makes it a desirable food supply for feedlot animals, in fact makes feedlots possible in the first place. Feeding the animals corn is not good for them, or good for us. Growing so many plants so close together is not good for them or good for us. The question then is, “Why do they do it?” The answer is “it’s cheaper”. If money were the only issue, then I would say, save money, but money is not the only issue. There are all of these external costs. Just last month how many articles did I get to write on the costs of industrial foods compared to their prices? Industrial agriculture is killing fish, making people fat, causing liver damage, killing bees, killing butterflies, killing lakes and streams. The only benefit of all of this damage is a one dollar meal at McDonald’s, instead of a two dollar meal. You get to buy a Big Gulp at 7-11 for sixty nine cents instead of for two dollars. Broccoli costs more than Hamburger Helper.

I wish we could all just turn away from the foods that are causing the problems. I can and have, but I know maybe your home economics and time limits may make you think you can’t do what I have done. I wish you would challenge yourself to try. Just staying on the outside walls of your grocery store will save you money and might just save your life. It’s a start, and it’s way easier than getting the same results out of the government.

Edited to account for the actual order of problems with phosphorus runoff. Tilling is worse than no-till. Both end up with chemicals running off.

I am an instrument technician at the electric utility servicing the Kansas City Missouri metropolitan area. I am in the IBEW, Local 412. I was trained to be a nuclear power plant operator in the USN and served on submarines. I am a Democrat, even more so than those serving in Congress or the White House.
View all posts by dcarmack →
This entry was posted in Health, Living and tagged algae bloom, industrial agriculture, water quality. Bookmark the permalink.