Now Is The Time

If you live in the Northern Hemisphere like I do, now is the time to be thinking about buying fresh foods from your local farmer’s market. Right now most of the produce that is locally grown is at it’s prime, so shopping where the farmers sell directly to us will have the most to choose from at the best prices.

Here is a link to the directory of Kansas City area farmer’s markets.

I will personally visit the market at the river in downtown Kansas City, or the one here in my suburb of Liberty, Missouri. Both are well attended by farmers and eaters.

If you go, take a wagon or cart so that you can load up on easy to can vegetables. If it is your first time canning foods, think about just getting tomatoes.  Get enough for seven quarts of whole tomatoes, which should be around twenty pounds. I say get tomatoes because the canning process is the very easiest for them. Tomatoes contain enough of their own acids that you can prepare them in a ‘bath canner’. 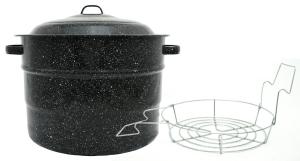 A bath canner is a large pot with a wire rack inside to hold your quart jars. The lid fits on the canner loosely, and the temperature of the water doesn’t go above boiling temperature at your elevation. This kind of processing is safe for tomatoes and other high acid foods. The tomato canning evolution is really easy, too.

This is where I found out all of my government approved home canning techniques, it’s free, because you already paid for it.

First you clean and sort your tomatoes. Pick tomatoes for canning whose skins are intact, and pick ripe ones. Green ones don’t yet have enough acid in them for canning with the red ones. Weight out enough tomatoes for a whole batch, then core the tomatoes so that you aren’t cooking and canning any of the green leaves or cores. I just run a paring knife in far enough to get the bits out I don’t want to eat in my foods later on.

Blanch the tomatoes so the skins come right off. To blanch them you put a pot of water on to boil, then keep it simmering. Put some tomatoes in the water for a minute, the skins might split, they might wrinkle. Remove them from the water and then dip them in cool water to keep them from cooking any farther. The skins should now peel right off.

Load the skinless tomatoes into clean quart canning jars, and pack them in as tight as you can, but only up to about the beginning of the neck of the jar. The juices will boil when you are canning them and you need some room for this to happen without forcing bits of tomato between the seal of the lid and the jar.

Run a knife into the jar to get trapped air out of it. There should be enough juice so that you don’t have to add any liquid, but if you need to, use the water you are blanching the tomatoes in. Put salt in and lemon juice or vinegar if you are using low-acid tomatoes.

Clean the sealing area of the jar and the threads for the lid with a paper towel and place the lid and ring on per the instructions that come with your brand of jars. Tighten the ring the required amount.

Your bath canner should already be at or near boiling temperature with the wire frame in it. the frame makes it easier to get the jars out when you are done, and it keeps the jars off of the hot bottom of the pan. You should have the canner about half full of water, because when you lower the basket the jars will displace lots of water, and you don’t want to overflow. At the same time you do not want the tops of your jars out of the water. If this happens then you can actually boil water out of your jars, keeping them from sealing properly, and causing your finished tomatoes to be setting dry because there is not enough liquid in your jars any more.

Process this batch for the required amount of time, don’t go less, as you run the risk of leaving some bacteria alive in the middle of your jars if you do. I have never had a failure in this regard, but I would hate to be responsible for killing myself because I lost track of time.

When you are done, lift all the jars out using your wire basket, take the jars out to cool using a jar lifter, because they will be boiling hot. Don’t mess with the lids or rings, let the cooling product suck the lid down on it’s own. The warm sealing ring will form a perfect, air tight seal unless you mess with it. In about a half hour you should start hearing the lids ‘pull down’ as the vacuum in the bottle seals them forever. Ting!

When they are at room temperature you can remove the rings to be reused, as the jars don’t need the rings now to seal.

About thirty quarts of tomatoes will last me well into the next canning season. This year I had four quarts left over when I got my first big batch of Roma tomatoes for processing. Roma are my favorites because I can fit whole tomatoes into the jars without cutting them, and the flesh is not grainy at all, which leads to great sauces. 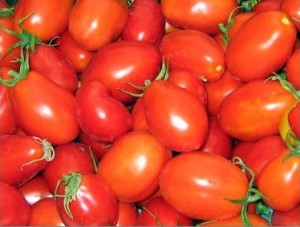 I am an instrument technician at the electric utility servicing the Kansas City Missouri metropolitan area. I am in the IBEW, Local 412. I was trained to be a nuclear power plant operator in the USN and served on submarines. I am a Democrat, even more so than those serving in Congress or the White House.
View all posts by dcarmack →
This entry was posted in Health, Living and tagged canning, canning tomatoes, farmer's market, local food. Bookmark the permalink.