They Aren’t Evil, By Definition

There is a scene in the documentary “Fed Up” where a US Senator from Iowa says “I don’t know how they sleep at night,” as he is discussing the lies that big food producers will tell under oath during testimony to Congress. Of course, they lie because they can, because the particular people giving the testimony are being paid to lie. The people actually testifying  have a soul so, if they believe in such a thing, they can know they are committing a sin, committing a crime.

The corporations for which they work though, have no soul. They cannot commit a sin. Nothing they can do is evil, because their only two purposes in existence are first, generating profit for their owners, and second, shielding the owners from any responsibility for the crimes, sins, and evil actions of the corporation.

So, you ask, “what is the point of this line of thought”. Today in Salon.com there is an article about the way that corporations are making meat for us. The article lists various egregious actions and crimes against nature, humanity, and the law. In one hundred percent of the cases they list, the purpose of the corporate activity is to save money on the costs of producing meat. In some cases the savings are minuscule, and the crimes great. In some cases the corporation gets caught and forced out of business. Since the corporation is really just a legal fiction, created only to shield the true criminals from punishment for their behavior, it has done it’s job…the shell may be cast aside and a new one created to shield the exact same criminals as they go right back to business as usual under a new name.

In March, we told you about a giant recall of beef from Rancho Feeding Corp. in Petaluma, California because the slaughterhouse “processed diseased and unsound animals and carried out these activities without the benefit or full benefit of federal inspection.” The recalled meat was found in Nestle’s Philly Steaks, Cheese Hot Pockets, Walmart Fatburgers, Kroger Ground Beef Mini Sliders and other well-known brands.

It turns out the “unsound activities” were criminal. While inspectors were on their lunch breaks, workers processed condemned and cancerous cows and put the heads of healthy cows next to their carcasses, charges a federal indictment. Employees were also directed to “carve out” USDA Condemned stamps from carcasses.

Like Westland/Hallmark Meat Co., the slaughterhouse behind the school lunch recall in 2008, Rancho Feeding Corp. was a slaughterhouse where farmers could dump sick and dying dairy cows who could no longer walk, still making $400 per carcass. And like Agriprocessors, an Iowa kosher slaughterhouse charged with such serious worker abuse, it was forced to shut down, Rancho was back in business almost overnight, under a new name and with many of the same employees. We learned our lesson!

The fault here is not with the corporation. It is performing it’s primary functions exactly as designed. The reason that this can happen is that our government is not performing as it is designed. An actual deterrent would involve real penalties for the actual humans directing these corporations to commit crimes. The existing state of affairs would be like forcing the Nazi party to shut down, while allowing individual SS guards to go right back to work for whatever replaced the Nazis.

The thing that will actually stop companies that produce meat from committing crimes against nature will be when we stop purchasing their products because of it. I don’t know if everyone could purchase locally grown meats like I do, whether that system can actually provide us all with food. I do know that if even a small percentage of us start doing it, though, the corporations will react to protect their market share. They will begin to change the way they raise meat and begin doing it more like the small meat producers where I purchase mine.

Here are the things that I know about that would have to change before I will buy corporate meats:

2. Stop feeding grain in the last six months before market.

3. Start encouraging the workforce to unionize, this would protect them against illegal immigrants and bosses that like them. Meat cutter used to be one of the best jobs in the US.

4. Stop raising pork and chicken in confinement. It’s unhealthy for them and for us.

5. Stop giving cattle drugs (besides antibiotics) to make them grow fatter faster. Those drugs are passed straight on to us.

6. Open up their operations to public scrutiny, instead of passing laws to make viewing agriculture operations a crime.

We can make them do this easier by not buying meat at the grocery or your big box store than we could by working to get laws passed. It’s too easy to change the law back. It’s impossible to make us eat corporate meats, though. 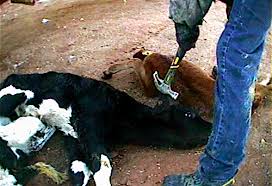 I am an instrument technician at the electric utility servicing the Kansas City Missouri metropolitan area. I am in the IBEW, Local 412. I was trained to be a nuclear power plant operator in the USN and served on submarines. I am a Democrat, even more so than those serving in Congress or the White House.
View all posts by dcarmack →
This entry was posted in Health, Living and tagged antibiotics, beef, chicken, corporate crimes, Food Safety, growth hormones, meat safety, pork. Bookmark the permalink.