Money, A Poor Measure of Value

I have said before that what something costs is rarely a good indication of what it is worth to the world. The ‘free’ market is a place where you can sell something like oil, that when used is forever lost, for seventy dollars per fifty-five gallon drum, but something like a diamond, that will never go away until the Earth is consumed by the failing sun is worth one thousand dollars for a tiny chip. Oil is used to produce food in the quantities that we need to survive, diamonds are used to make lifeless things twinkle.

The food commodities market is another place where the ‘free’ market can get it all wrong. Instead of farmers selling their products to consumers, they sell to the exchange, where all of the produce of the years efforts are hitting the market at the same time. Naturally, if it is a very good year for plants, it is a horrible year for prices. Corn isn’t worth what it costs to farm it. To make up the difference, and keep people interested in playing this losing game, we have subsidies. You see, we actually need corn and soy to keep the processed food industry stocked with raw materials. If it weren’t for the subsidies, no farmer would make it past the first season in the existing system. There would be a lot less corn planted after that year, the supply would tighten, the price would go up to attract more people to farming. If farming were a job like sacking groceries this would be a great way to operate. Farming is not like sacking groceries, and you can’t just decide tomorrow that you will try your hand at it. Running experienced farmers off their land would lead to food system chaos.

Think you have it tough at work? Consider the plight of the Midwest’s corn and soybean farmers. They churn out the basic raw materials of our food system: the stuff that gets turned into animal feed, sweetener, cooking fat, and even a substantial amount of our car fuel. What do they get for their trouble? According to a stunning analysis (PDF) by Iowa State ag economist Chad Hart, crop prices have fallen so low (a bumper crop has driven down corn prices to their lowest level since 2006), and input costs (think seeds, fertilizers, pesticides) have gotten so high, that they’re losing $225 per acre of corn and $100 per acre of soybeans.  So if you’re an Iowa farmer with a 2,000-acre farm, and you planted it half and half in these two dominant crops, you stand to lose $325,000 on this year’s harvest.

Two thousand acres would lose the farmer 325,000 dollars. According to the USDA in 2011, “Around 80 million acres of land are planted to corn, with the majority of the crop grown in the Heartland region.” If we divide 80 million by 2,000 we get 40000. If we multiply 40000 times 325,000, we get 13 billion dollars. If we divide 13 billion by three hundred million you get 43 dollars. That is the share of money that every man woman and child pays into the system to keep farmers on their land, farming all year long and making zero dollars for their effort. Truth is they get more than enough money to break even. Our share will be more than that. Corn doesn’t cost what it’s worth.

It didn’t used to work that way.

From Michael Pollan’s “The Omnivore’s Dilemma”

For storable commodities such as corn, the government established a target price based on the cost of production, and whenever the market price dropped below that target, the farmer was given a choice. Instead of dumping corn onto a weak market (thereby weakening it further), the farmer could take out a loan from the government—using his crop as collateral—that allowed him to store his grain until prices recovered. At that point, he sold the corn and paid back the loan; if corn prices stayed low, he could elect to keep the money he’d borrowed and, in repayment, give the government his corn, which would then go into something that came to be called, rather quaintly, the “Ever-Normal Granary.” Other New Deal programs, such as those administered by the Soil Conservation Service, sought to avert overproduction (and soil erosion) by encouraging farmers to idle their most environmentally sensitive land.

The difference is that before, the government provided a way that farmers could bring the crop to market not all at once. Now, the government encourages maxed out production, which keeps the price depressed. Depressed prices mean that it’s economically feasible to feed corn to animals. Corn is not their natural food, and it causes them to have health problems, so the farmers also feed them drugs to counter those problems. Corn in cattle diets cause them to develop e-colli infections and that spreads to other foods, leading to problems with meat and vegetable recalls…the cascade of problems is long. Suffice it to say that most of the problems with our food system, with the explosion of sugar in our diets, with the epidemic of obesity goes directly back to cheap corn. Money is the source of our troubles. Corn should cost more than it does. Corn sweetener should cost more than it does. But, they don’t.

We, in the end, control the market with our wallets. You and I, when we elect to buy our vegetables in their real forms, control what farmers will plant. The day that the only demand for corn is cattle that can’t be sold because they are grain fed is the day that farmers will quit feeding us nothing but corn. Look at this chart of crops planted in the US.

About six million acres were planted with fresh vegetables. You know, real food for people. Most of those vegetables went into production for canning, not for sale at the vegetable aisle of your grocery. Ninety Million Acres were planted in corn. Seventy Eight Million Acres were planted with corn’s doppelganger, soybeans. That’s 178 million acres of cropland for two crops. Thirty times more than all of the real food you see at the grocery. It doesn’t matter to the farmer, he gets paid to produce, no matter what the price does. The incentive is to plant more and more acres, because that’s the only way to get more money in this system. In fact, we are making even more corn that the system can handle. What do they do with the corn that we don’t need? 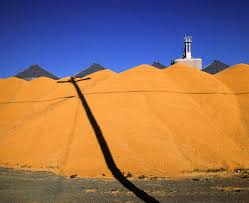 That is a mountain of corn on the ground. This view can be found all over the midwest. Corn is worth–really–even less than the market is paying. It’s worth way less than the subsidized price to you and I. This is the equivalent of tickets to a game where there are fifty thousand empty seats and extra tickets laying on the ground outside the stadium. This is wasted energy, time, and effort. This is a broken system that is wasting non-renewable resources and making us fat and sick to boot.

Stop buying processed foods. Stop buying grain fed meats. You owe it to yourself to vote with your wallet for a better food system.

I am an instrument technician at the electric utility servicing the Kansas City Missouri metropolitan area. I am in the IBEW, Local 412. I was trained to be a nuclear power plant operator in the USN and served on submarines. I am a Democrat, even more so than those serving in Congress or the White House.
View all posts by dcarmack →
This entry was posted in Health, Living and tagged corn production, crop subsidies, surplus food, USDA, wasting energy. Bookmark the permalink.

1 Response to Money, A Poor Measure of Value