Poison in your food. According to the CDC (Center for Disease Control) one in six citizens will become ill from foods they eat each year. That would be five hundred million, give or take a few hundred thousand, that get some symptom of food-borne illness. It might not be five hundred million individuals, because, if you take me for instance, I got sick from foods that I ate on two separate occasions. Still, that is an enormous number, and all cases of food poisoning can’t be blamed on how our foods are processed before we get them. My cases occurred because I am notorious for storing foods too long, heating them too many times, and never throwing anything away. I am also hampered in my self defense by a nose that can only detect the very foulest of odors.

The Center for Science in the Public Interest has put together a handy guide to help us navigate the sources of food borne pathogens. Their “Field Guide to Meat and Poultry Safety” is full of handy tips and a Pyramid, like the one for nutrition, that shows the relative risk factors visually. The top of their pyramid is filled with chicken and hamburger, the bottom has sausages and chicken nuggets. 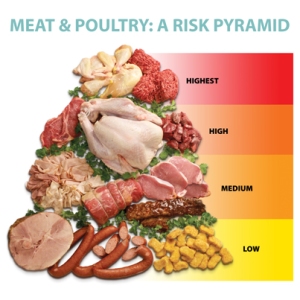 That is a “Risk Pyramid”. Notice that chicken is in that picture at the top rung, but turkey is down one level. This represents the fact that, while poultry is known for harboring some of the easiest to get food bugs, we buy chicken already cut up for us, while we buy turkeys whole. If you buy your chickens whole, too, they are less risky for you to prepare and eat. That points out what it is that makes foods dangerous, processing. Steaks are in the high group because your steaks may have been “mechanically tenderized” which means they are run through a machine with hundreds of little knives that stab the meats, pre-chewing if you will, so that your steaks will still be somewhat tender when you over-cook them to be sure they are safe to eat. Steaks processed in this way are more likely to have surface pathogens stabbed into the meat. When you cook a steak you generally kill any bugs on the surface, but the interior of the beef is still somewhat raw (medium) so that it’s edible. If pathogens have been jammed in there they survive to torment you.

Notice that pork chops are a level down from steaks. This represents the fact that you cook pork to a higher edible temperature normally, so there is no need to mechanically tenderize them, since we are used to eating pork well done and dealing with dry white meat pork. The lower amount of processing accounts for the lower risk to us.

At the lowest level of risk are two kinds of meat. Cured meats like ham and sausage have chemicals in them that retard the growth of any living pathogen. Ham is soaked in a salty, nitrite brine for a couple of weeks. It gives ham its always pink color and is what makes ham taste like ham and bacon taste like bacon. The sausages are ground up with the cure right in the skins, they are not brined but have the same chemical protection from germs. In this case processing makes them safer. The second kind of meats are the actual processed food products like chicken nuggets. Processed meat patties, chicken nuggets, and other highly altered food products are full of “God-Knows-What” chemicals and artificial ingredients. This class of meat includes any that you could keep in the back of your ice box for six months and it would taste as good as if you ate it right when you bought it. In fact, these kinds of foods may well be six months old when you actually purchase them.

So now we have an idea of which foods are the highest risk and which are the lowest, but one thing that all of these meats have in common is that they are not the source of the risk. No living animal has these food borne pathogens embedded in it’s flesh. These pathogens exist naturally, but they exist primarily in the bowel of the host animal. Chicken hosts Salmonella, primarily. Beef’s most likely pathogen would be E. Colli. These germs do not spontaneously occur on meats. If you really want to minimize your risk for these two food poisons, you should find out how Salmonella and E. Colli are spread from the actual source. When you carry them into your house they are ending a VERY long journey.

E. Colli live right now in your bowel, and in the bowel of every healthy human. Your’s are your friends and they coexist peacefully and never cause any distress. E. Colli is one form of probiotic. The E. Colli that live in the bowl of some cattle are incredibly dangerous to you. The strain of germ that has evolved to be harmful does not exist in cattle that are left to graze hay and grass their whole lives. Some reports have shown that even feeding cattle grass for the last week of their lives eliminates the harmful strain from their bowel. Of course it does not remove the bacteria from the filthy lots they stand in cheek to haunch. The existence of harmful bacteria in the bowel of animals at slaughter is the very source of the e. colli contamination. If you get sick from eating beef this is where the germs originated, from living grain fed beef. As the carcass is processed, the bowel is perforated and a ‘sample’ of germs got onto the surface of the meat. Invisible, the germs spread to other areas of the processing plant, get on the tools, people and machines turning a side of beef into cuts of beef and hamburger. This is why whole cuts are safer. The germs will be on the outside of the meat, like dirt. They do not penetrate into the meat without mechanical help. That is why e. colli for a long time was considered to be a hamburger disease. Any e. colli that you contract comes from this one source, even if you get it from contaminated spinach or sprouts, it originates from the stool of the cow. Maybe it got to a vegetable farm in a flood. Maybe they used unsanitary manure as fertilizer. The e. colli came from cow patties.

Salmonella begins it’s journey also in the unsavory location in the chicken. It, too, lives inside the bird until it is freed in the processing facility. It too is the product of the system in which chickens find themselves. Confined in tiers of tiny coops one over the other, spreading the disease from bird to bird by their handlers and by literally crapping on each other’s heads. They wander around in tight bunches wading through contaminated confinements in a hellish environment. They carry the salmonella germs in their guts to the processing plant, where it is then released and spread by the processing process to the people and machinery doing the processing. When they tell you to clean up all chicken blood and wear rubber gloves and use separate cutting boards for chicken, what you are trying to do is keep these germs off of things that will end up entering your body uncooked, like your fingers. If you get salmonella contamination on your uncooked foods there may be enough for the bacteria colony to thrive and spread, despite the natural competition provided by your own beneficial bacteria.

Now look at the pyramid and see what it is really showing you. The meats at the top are the hardest to keep clean, and once contaminated, they are impossible to clean. You hear about food recalls all the time. As you go further down the pyramid you get to meats that, while they might be contaminated are either normally cooked enough to kill it, or they are defended by chemicals added during their processing, or they come to you pre-cooked. Once you bring the germs into your house you can spread them to foods that you normally eat uncooked.

All of this starts in the feed lot or confinement. It starts with the way the animals live, then the way they die. If you get meat from a local source you are not one hundred percent defended from food borne illness, but it’s not likely to come from your meats. My grass-fed beef is processed in a facility that also processes grain fed meats and wild game. Germs may be spread from unhealthy cattle to my order, it’s just not as likely as it is from a processing plant that slaughters a million head of cattle per year. My locker is a very low speed operation compared to the big plants in Iowa and Nebraska. My risk for every meat in my ice box is low compared to the same cuts of meat from Walmart or Hy Vee.

Read the advice provided by the CSPI. If you are careful you can buy industrially processed meats and your risk for illness or death from them will be minimized. Buy more expensive grass fed meats from a local source and your risk will be even lower. Buy your vegetables from a local source and your risk will be lower still. Understand your enemy, know his strengths and weaknesses and you will live a life undisturbed by food poisons. One in six of us will not be so lucky, will not be so careful, will eat meats we did not prepare and then get sick. It happens to the best of us, it happened to me two times in the last twelve months. I am now more careful, the things that don’t kill us make us stronger–or at least wiser.

I am an instrument technician at the electric utility servicing the Kansas City Missouri metropolitan area. I am in the IBEW, Local 412. I was trained to be a nuclear power plant operator in the USN and served on submarines. I am a Democrat, even more so than those serving in Congress or the White House.
View all posts by dcarmack →
This entry was posted in Health, Living and tagged e. coli, food borne pathogens, food poisoning, food processing, Food Safety, grass fed meats, industrial meats, salmonella. Bookmark the permalink.