If you look at someone that is way overweight, it is almost automatic that you would blame them for their condition. Now that we are a nation of overweight citizens, with two out of three of us having a body mass index that is above the normal range, are we all to blame for this fact? Are we now a nation of people that are all individually to blame for our expanding waistlines? The answer, provided by new neuroscience, is “Yes and No.”

Likewise, if you look at an adult woman and she is thin to the point that it is painful to look at her, you just know that she is to blame. Her eating too little is obviously something that she could do something about, right? “Just eat like the rest of us” seems like advice that would be so easy to take. Anorexia is an often fatal mental condition. It is the exact opposite of overeating, but it is a dis-ease. In fact, it is the most often fatal of all mental illnesses. That woman that you are blaming for not eating is suffering from a mental condition, but what, exactly is the nature of the illness?

The study’s findings may help explain why the eating disorder, which has the highest mortality rate of any mental illness, is so stubbornly difficult to treat. But they also add to increasing evidence that the brain circuits involved in habitual behavior play a role in disorders where people persist in making self-destructive choices no matter the consequences, like cocaine addiction or compulsive gambling.

I, personally, have been know to make life choices that are self-destructive, no matter the consequences. I could easily be a compulsive gambler. I am a compulsive sweet-eater. I am a compulsive liquor drinker. You could be, and probably are, this person as well. If you have habits that are not illegal, that do not make you sick, that do not make you bankrupt, then you are lucky in your choice of habits. Perhaps your habit is going to work and working every moment that is available to you. It consumes your life, it ruins your relationships, you don’t know your own children or grandchildren because you are habitually addicted to your career. Inside the highways of your brain, this is no different than not being able to pass the pastry tray without taking a sample. You have turned this life into a ‘success’ financially, but you know that it has come at a great price. The truth is that you cannot help yourself. Saying yes to all of the work you can handle and more is a habit that is no different than my habit of not saying no to another beer. At least it is no different where it matters, in the core of your brain.

The researchers used a brain scanning technique to look at brain activity in 21 women with anorexia and 21 healthy women while they made decisions about what foods to eat.

The anorexic women were more likely than the healthy women to choose low-fat, low-calorie foods, and they were less apt to rate high-fat, high-calorie foods as “tasty,” the study found.

As expected, both the anorexic and the healthy women showed activation in an area known as the ventral striatum, part of the brain’s reward center. But the anorexic women showed more activity in the dorsal striatum, an area involved with habitual behavior, suggesting that rather than weighing the pros and cons of the foods in question, they were acting automatically based on past learning.

Dorsal striatum: the “northern” part of the striatum, activated when goal-directed behaviors shift from impulsive to compulsive; central to stimulus-response learning; triggers actions that are automatic and difficult to turn off; also fuelled by dopamine. 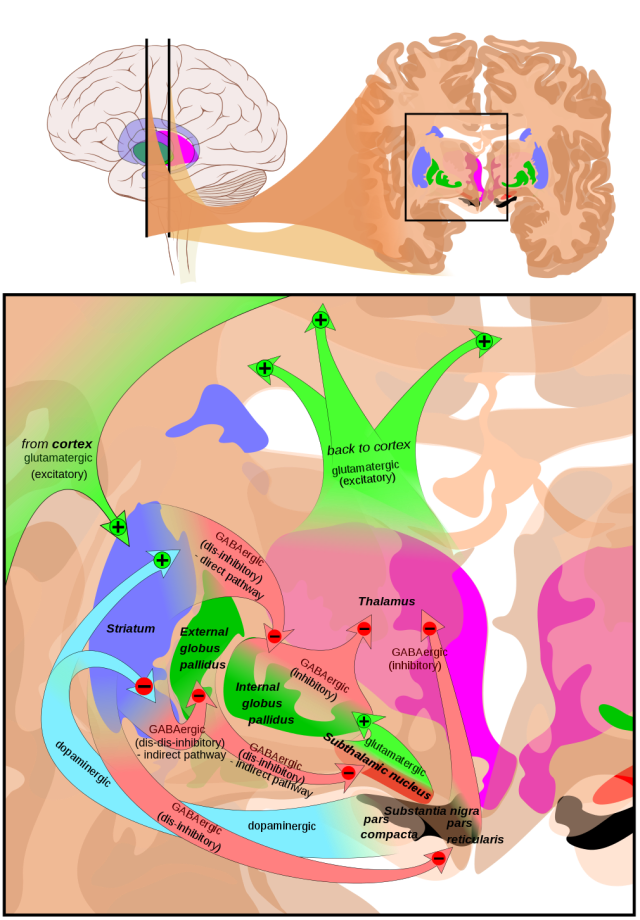 The brain and areas around dorsal striatum.

Ladies and gentlemen, this is the part of your brain that controls things that you do without having to think about it. Your brain has evolved to reduce the high-reward behaviors to automatic actions that require little brain power to execute. Do you look at your cell phone habitually? Without hooking you up to a machine I can guarantee that your dorsal striatum is lit up. Ever owned an individual stock in the stock market? Your habitual intraday checking of that stock price is lighting up your dorsal striatum.

But the northern hemisphere of the striatum, the dorsal striatum, has a different mode of operation. It doesn’t care about the value of rewards, it isn’t attuned to likely pleasures, and it’s not about to send its owner on an impulsive hunt for goodies. Rather, the dorsal striatum records connections between stimuli and responses, so that well-learned actions will be linked with particular stimuli (i.e., cues) and get triggered by those stimuli whenever they are perceived.

The activation of the dorsal striatum is a huge marker for addiction. The reason is that compulsive action like checking your cell phone are different than a normal reaction. These behaviors don’t require a stimulus, they come up on their own, compulsively. A trigger can start it, but most of the time these behaviors are automatic. You are driving along and you just have to check your phone. It’s almost in your face before you realize you have even reached for it.

These behaviors are all related, because they all go through the same brain. The overeater is not diseased, their brain is not different from yours, and they can’t control their weight because they are being treated for the wrong illness. A weekly trip to OA (Overeaters Anonymous) treats the fat man like the problem. He doesn’t have enough willpower, is weak, doesn’t try hard enough to eat less, different, healthy. In reality, the overweight are just suffering from habits all through their day that are likely to make them stuck in their behavior patters. Looking in the refrigerator is a classic example. Its truly compulsive. How about starting off for the Coke machine? They are halfway there before they realize where they are going. Shopping for groceries is full of habitual behaviors that must be thought about in order to change them.

The second biggest impediment to fighting compulsive behavior is that it must be replaced with another behavior. Heroin addicts in Vietnam came home to a different world, totally. They didn’t stay addicted because there was no way to continue the compulsive behavior. I quit smoking successfully when I changed jobs at the same time. None of my compulsive times and actions applied to this job.

The very biggest impediment to successfully changing a compulsion is acknowledging that there is nothing wrong with a person who acts compulsively. It is actually a feature of the human brain that allows us to be evolutionally successful creatures. It is not a bug in the software. The anorexic has a destructive habit. Antidepressant drugs will not help, because the problem is not one of self-image. The behavior is not a choice it is a compulsion. That behavior modification is different than what is currently being treated.

The heroin addict is no different mentally than the workaholic or the compulsive phone-checker. The addict should not be reviled, shunned, even looked down upon. Literally, they are no different than you or I, only their compulsion is different. What is needed for us to more better help them is extra compassion and empathy. They need help understanding that they are not damaged goods, unworthy of self-love. They are just suffering from a bad habit, one that they can battle using the well known tools of behavior modification. Having a habit does change the brain. The brain, however, is designed to change, and it will easily change back to something more useful to it’s owner, but that does not start with labeling the addict as “Addict” or “diseased”. Their self-hate and your hate and disgust are not helpful.

“It helps to explain why treatments we expect to work, like antidepressantsand cognitive therapy, don’t work very well,” Dr. Walsh said. “Habits have to be replaced with another behavior.”

For example, he said, one strategy might be to get the patient to look at entrees as well as at the salad bar, or to switch to eating with the left hand, as a reminder to think about eating different foods.

If you have a self-destructive addict in your midst, your attitude toward him or her is a habit. Your disgusted sneer, your averted gaze are compulsive behaviors. They automatically convey your thoughts, and you can’t seem to help it. Intentionally smile and give a kind word. Its the equivalent of our anorexic using the off hand to eat with. It will remind you to think different about the victims of compulsion that you know and love.

I am an instrument technician at the electric utility servicing the Kansas City Missouri metropolitan area. I am in the IBEW, Local 412. I was trained to be a nuclear power plant operator in the USN and served on submarines. I am a Democrat, even more so than those serving in Congress or the White House.
View all posts by dcarmack →
This entry was posted in Health, Living and tagged addiction, dorsal striatum, effective rehab, food addiction, heroin, overeating. Bookmark the permalink.