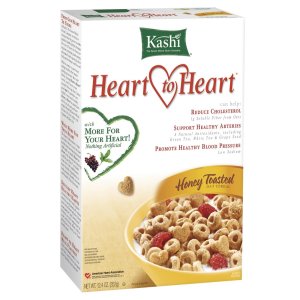 I added the exclamation point. The words are on the box above, “Nothing Artificial.” Do you wonder if that is true? I’ll just point out that these are unnaturally doughnut shaped foods, found in a box, labelled with health-claims galore. Next I will point out that Kashi is now a small food group found under the umbrella corporation Kellogg. Ages ago, Kashi was an upstart company that produced natural foods. Kellogg bought the name and the idea that the food was all natural, no artificial ingredients.

A couple of months ago, Kellogg and Kashi were in the news:

The Kellogg Company, maker of some of the country’s most familiar breakfast cereals, said on Thursday that it had agreed to drop the terms “all natural” and “nothing artificial” from some products in its Kashi line as part of a settlement agreement ending a class-action lawsuit.

Also worth note in the article:

[Kellogg] has paid to have some Kashi products certified by the Non-G.M.O. Project. Livia M. Kiser, a lawyer who is co-head of a task force on marketing compliance at the law firm Loeb & Loeb, said in an email that she expected lawsuits like the one Kellogg was settling to continue. “Historically, companies have primarily focused on making their labels compliant with applicable government regulations,” Ms. Kiser wrote. “Now, however, companies should expand their considerations to include risk and threat analysis around the descriptors and adjectives they are using to distinguish their products.” Among the Kashi products listed in the original lawsuit were some of its cereal and granola bars, waffles and shakes, and some GoLean items. Kellogg would not disclose which items would lose the “all natural” or “nothing artificial” terms.

I quickly point out, that this change in Kellogg labeling policy for their ‘all natural’ line of foods was not brought about by government regulators clamping down on fraudulent labeling, but by private watchdog groups in California. The government claims to be not particularly interested in what items of foods bear the words ‘no artificial ingredients’ if the ingredients concerned occur in nature (just not in the natural versions of the foods under consideration.) In this specific case, a few of the ‘natural ingredients’ were, pyridoxine hydrochloride, calcium pantothenate and soy oil processed using hexane, a component of gasoline. “Such ingredients occur naturally — wheat germ and flaxseed are sources of pyridoxine hydrochloride, for example — but food companies, as well as makers of vitamins, often use synthetic versions to control costs and ensure consistent supplies.” Kellogg paid the plaintiffs in this case 50 Million Dollars, and decided to change their labeling.

They changed the label. The ingredients remain in the food. Kashi is now in your brain as a health food, and Kellogg feels free to change what is in it, and how it is made as long as they don’t mislead you with a claim on the box that can be proven false. To be fair, they ought to label it “Contains Artificial Ingredients” in the same font and place as the old false claims. That’s not part of the settlement. They count on you buying this boxed, processed, health claim labelled food because you recall that it contained no artificial ingredients. It was all natural at one time. You know that a company would not take a health food, found in health food stores and modify it to be a less natural version without warning you. The government wouldn’t allow that kind of bait and switch, right?

Want to know why I don’t buy processed foods that come in boxes, bags or bottles, no matter what the label says?

I am an instrument technician at the electric utility servicing the Kansas City Missouri metropolitan area. I am in the IBEW, Local 412. I was trained to be a nuclear power plant operator in the USN and served on submarines. I am a Democrat, even more so than those serving in Congress or the White House.
View all posts by dcarmack →
This entry was posted in Health, Living and tagged FDA, Food Safety, FTC, health claims, kashi, kellogg, truth in labeling. Bookmark the permalink.