The Oil You Can’t Eat 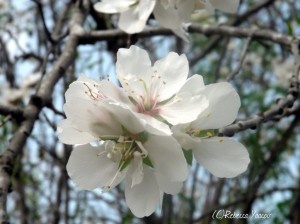 I love almonds, and I love almond milk. A three pound bag of raw almonds from Costco costs me about twelve dollars I think, maybe a little bit more. Out of a bag of almonds I will make gallons of home made almond milk, roast several batches of almonds in the oven for my own chopped nut mixes to put in my muesli that I eat for breakfast.

Ninety percent of all of the almonds grown for the whole world are grown in California. They will grow anywhere that has a mild spring, because a late cold snap will kill the blossoms and your chances of an almond harvest for the year. In fact, almonds are grown around the world, but most of the world’s almonds are produced here. You can’t beat the convenience of opening a bag of almonds that are already hulled, ready for you to blanch, roast or milk, not to mention inexpensive.

Here is the thing about the inexpensive part, though. Those almonds cost way more to the world and to the future than I pay for them. A couple of days ago I talked at length about the difference between price and cost. Almonds are a great example of the external costs that are not reflected at all in the price. Almond groves are a major factor in the death spiral of the European honeybee in the world. Watch this documentary today and you won’t wonder at all why the bees are dying.t Almond groves account for a major part of the irrigation demand, which is provided from depleted California rivers and reservoirs, and competes with people and real foods for that valuable water.

At least the almonds are grown in the US. I live in Missouri and the distance to the almond groves is only about 1700 miles. Getting them to me doesn’t expend all that much energy. However, of the approximately one billion pounds of almonds harvested annually in California, eighty percent of them are bound for the rest of the world. Japan is the largest consumer of California almonds. Japan is 5600 miles from the coast of California. Getting the almonds from here to there every year takes a great quantity of oil to power the freight ships that carry it. It is oil that powers those ships, and it powers the ships that bring salmon from South America to the US. Salmon also grow wild on our Northwest coast. Fishing for them produces salmon for the market, but it is high priced. Farmed salmon, from fish farms all over the world are much lower in price, but getting it here costs the world oil in the freighters used to move them. It is almost 6000 miles to San Francisco from Chile where about one third of all farmed salmon are from. The only reason they are grown so far away is based on money. Wages in Chile are low, regulations on agriculture are more lax. The savings on those things outweigh the price of the oil to get them to us. Farmed salmon prices are far lower than caught salmon prices. 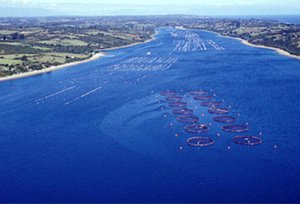 The true cost of all of these foods that are produced at far away places on the planet and shipped huge distances by freighter ought to be measured in oil. By now we all should be aware that there is a finite supply of oil in the Earth. Someday, sooner rather than later, oil will be more scarce, priced to match it’s true value to the planet. When the oil is gone, we will wish we had eaten foods closer to home, instead of taking advantage of the current fact that oil is not priced according to it’s real value to human life. We are mining oil at such a rate that it’s price is very low compared to it’s true worth. We use it for everything–putting our crop on the field, taking our crop off the field, producing the fertilizers needed to boost ourcrop yield per acre, getting our crop to market, getting our crop home from market. We will need oil someday and all of the oil we wasted because there are low wages in China and no environmental regulations in Chile will come back to haunt us. The price of everything ought to be tied to the true value of the raw materials we use to get it to us. In a perfect world, we would only move things around the world on freight ships that are only found where they are, because that is where nature put them, like oil, for instance.

US almonds are the most popular to the world because the US subsidizes their marketing around the world. Our almonds are cheaper than home grown almonds because the US taxpayer makes them cheaper. Our milk products are cheaper than home-grown milk in Jamaica for instance, as you can see in this documentary. The dairy farms in Jamaica were forced out of business because they can’t compete with dairy from Wisconsin. Dried milk, freighted around the world is cheaper than local cows, milked by hand, and the milk carried on bicycles to the bottler. Here the cost versus price difference is starkly visible.

I don’t have a prescription for change that avoids the fate awaiting us all. This system will continue until the obvious endpoint is upon us, at which time it will be too late to conserve. All I can do is my tiny little part. I will eat local foods, in season. I will store foods that are bountiful to carry me through the months when it is not in season. I will eat real food, not from a box, bag or bottle. I can’t stop salmon farming, but I can cease adding my approval through my purchases. Living right will cost me more, but it’s right. That’s worth something.

I am an instrument technician at the electric utility servicing the Kansas City Missouri metropolitan area. I am in the IBEW, Local 412. I was trained to be a nuclear power plant operator in the USN and served on submarines. I am a Democrat, even more so than those serving in Congress or the White House.
View all posts by dcarmack →
This entry was posted in Health, Living and tagged almonds, aquaculture, conservation, price versus cost, salmon. Bookmark the permalink.