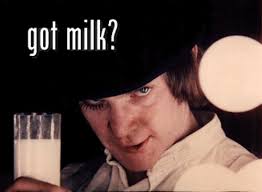 It comes in a bottle. If it did not, you would never drink it–milk. I, for one, have always thought that human beings drinking the product of another species mammary glands as a beverage was an unnatural act. This act is so unnatural I always wonder how in the world we ever got started doing it. As far as I know there has never been a movement toward storing the product of our own species’ mammary glands for use as a beverage. The mind actually recoils from the thought for some reason, but there is not the same reaction to drinking from cows or goats.

Once drinking milk turned into a profession, of course, it became something that was worth putting health claims on. Milk found it’s way onto the food pyramid, found itself being called a health food. It became common knowledge that milk does a body good. Not giving your children milk would even make a person feel like somehow you were depriving your kids the jumpstart in life that daily doses of milk would give their peers.

Lately, the idea that milk health claims should get a pass from scientific scrutiny has been taking some hits. Today in Salon.com I read this:

This information comes to us from the British Medical Journal. They did a long term study, and long story short:

High milk intake was associated with higher mortality in one cohort of women and in another cohort of men, and with higher fracture incidence in women. Given the observational study designs with the inherent possibility of residual confounding and reverse causation phenomena, a cautious interpretation of the results is recommended.

They give us the standard caveats that correlation does not equal causation. Randomized study would have to be performed to ‘prove’ that drinking milk actually causes the problems that it is being touted as preventing. There is speculation at the method that milk consumption actually causes bones to become brittle instead of strengthening them with extra calcium. Lots of times if it seems to good to be true, it probably is. Now, however, the science will have to combat the money to get the word out.

Just like science against sugar is fighting a long struggle against science for sugar money, the pro-milk industry is sure to develop competing science to bolster the health claims on every milk bottle and carton.

I gave up drinking milk as a beverage as soon as I started making my own drinking decisions. I didn’t necessarily replace it with something better for me, but I never liked the way milk left my mouth feeling slimy, made my saliva thick. Lots of guys on the submarines I was on dreaded the day that all of the fresh milk was exhausted, while I wished that they could replace the milk machine for another soda fountain. Like I said, my replacement wasn’t any better.

At any rate, the science will be out on the health effects of milk for probably about fifty years, so you will have to make up your own mind whether or not you want to get your children hooked on the idea of drinking milk every day. Do yourself a favor though, if they won’t drink white milk, please don’t replace it with chocolate milk. You might as well feed your babies candy bars for breakfast as give them chocolate milk.

I am an instrument technician at the electric utility servicing the Kansas City Missouri metropolitan area. I am in the IBEW, Local 412. I was trained to be a nuclear power plant operator in the USN and served on submarines. I am a Democrat, even more so than those serving in Congress or the White House.
View all posts by dcarmack →
This entry was posted in Health, Living and tagged cancer, food science, health claims, heart disease, milk, osteoporosis. Bookmark the permalink.