Fat of the Land

In 1910 you couldn’t find any home in the USA that didn’t cook with animal fats. Suet, Lard, Tallow were found in every region and were universally loved and trusted. Heart disease was not yet even on the radar of the medical community, people just didn’t yet die of heart attacks. When I was born in 1960 things were beginning to change. Heart disease was now in the forefront of problems afflicting aging men, even the President of the USA, Dwight Eisenhower had had a heart attack, terrifying the nation at the thought of a Nixon Presidency, but I digress.

Through many years of mangled science and horrible advice we now live fifty years later in the health debacle of an epidemic of high blood pressure, high blood sugar, diabetes, liver disease, cancer, and heart disease. Heart attack may not be the number one killer any more, but only because so many new chronic diseases are killing us off earlier. What the Hell happened, right?

It is now a scientific certainty that we should never have trusted partially hydrogenated vegetable oils, or Trans Fats. Any vegetable oil that would normally be a liquid, like corn or soybean oil, if it has extra hydrogen atoms fused into it’s molecular structure, takes on a solid form. It is how margarine is made, it is how Crisco is made. It is so dangerous that the FDA now requires it’s presence in foods to be labeled as such. The Mayo Clinic says avoid it like the plague.

My grandma and yours used lard and butter for the most part to cook with. Natural animal fats were used at a rate of one hundred percent. Nobody had ever heard of using oils to cook with. Isn’t that amazing? Who cooks with anything else now? We have been so thoroughly conditioned to think that oils are healthy by the supermarket, doctor’s advice, television commercials, government information that it is hard to get your mind around the fact that animal fats are actually better for you than what you have been feeding your family for your whole life. Here is proof. Bucking this tide is vital.

If you can find fats from animals that have been fed grass for their entire life, you will have found the best fat you can possibly eat. Not only will it be high in Omega 3 essential oils, it will cook your food better than what you are using. It does not need to be stored in any special way, like in the refrigerator or freezer. For eons people would actually preserve foods that could spoil in fats. Whereas vegetable oils go rancid in fairly short order unless stored properly, your lard can set covered in your cupboard. 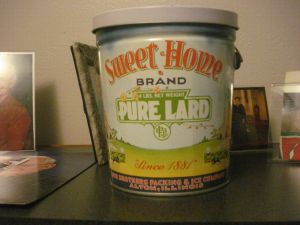 This is a sight that for generations graced every kitchen in the nation. A four pound lard can. There are lard cans to hold all of the lard that would come from a whole hog. Here is a six and a half gallon can, guaranteed to be rodent proof, made of metal so as not to leech plastics into your lard. 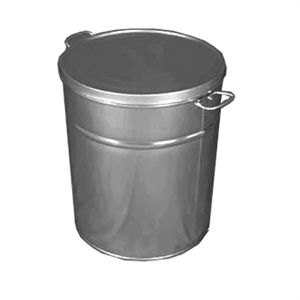 I just got one of these from AgriSupply online. It cost just under thirty dollars. Having just purchased a hog for my freezer I guarantee you that I will get all of the fat from my hog. I will render that fat into lard, I will store all of that lard in this six gallon tin in my storage room in the basement. It will never go bad, and I will never again use cooking oil in my foods. I am going to get a four pound tin that I can keep in the kitchen pantry, and I will fill it from the six gallon tin, as required.

Do you want to know how to render hog fat into lard? Here it is, pay attention, take notes! Cut the fat into one or two inch cubes. Put the cubes in your crock pot, turn it on high, put a cup of water in. Cook uncovered until the crock is full of fat. Ladle the fat into mason jars, through a reusable coffee filter. Let it cool. Keep it covered until you use it. It’s really that easy. There is absolutely no magic involved, there is no special precaution you must take to keep from poisoning yourself if you don’t do it right. No need to freeze or can, this stuff is so easy, even ancient civilizations could do it. It’s also the healthiest fat you can use, and that is not just my opinion.

Cooking with lard could not be easier, you use it just as you would Crisco or any other shortening. It keeps the same, too. Used lard can easily be strained and put into a grease container, like the one you might be using now to store bacon grease. As long as there is no  water in your lard (and there shouldn’t be) it will keep well until it has picked up too much flavor from the foods you have cooked in it. Dispose of it by putting it in the trash. Washing lard down the drain is asking for a visit from the plumber.

I am an instrument technician at the electric utility servicing the Kansas City Missouri metropolitan area. I am in the IBEW, Local 412. I was trained to be a nuclear power plant operator in the USN and served on submarines. I am a Democrat, even more so than those serving in Congress or the White House.
View all posts by dcarmack →
This entry was posted in Health, Living and tagged butter, lard, margarine, polyunsaturated fats, rendering lard, saturated fats, storing lard, unsaturated fats. Bookmark the permalink.

4 Responses to Fat of the Land