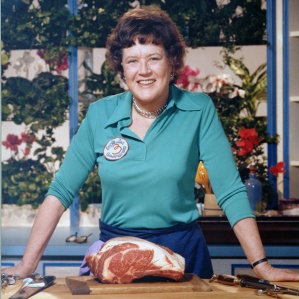 Too bad here in the US we don’t have a national cuisine that we would miss if it were suddenly taken away from us. Mediterranean countries have their diet, thousands of years old that some authorities claim is healthier than our national diet of Starbucks in the morning with a side of biscotti, a Healthy Choice frozen meal at lunchtime, and Hamburger Helper for dinner. Our national diet has only been what we all eat for about ten years, before that we ate McDonalds for breakfast and lunch, and dinner was Kentucky Fried Chicken. The ten years before that we ate Captain Crunch for breakfast, a brown bag bologna sandwich for lunch and we ate Shake and Bake chicken at the table with the family. If you go back far enough you can find a nation that brought it’s national cuisine across the pond from Europe or China or up from Mexico. The point is that we have no national cuisine and we never have. Each generation, since we move so much, since we are so busy, we always have been a nation of ‘eaters at convenience.’ We never had time to develop a menu to be respected and copied. When they told us to quit eating fats it wasn’t really that hard of a sell. Since we had no real dining habits the food industry started selling Trans Fats for us to cook with. We had no problem buying them instead of lard.

This from an NPR article on French McDonald’s:

McDonald’s, meanwhile, offers all kinds of Frenchified dishes, from the Alpine burger with three different kinds of cheese to tasty little gallette des rois, or King’s Cakes, popular after Christmas and sold by all the bakeries. Last year, it introduced the McBaguette.

We do not have a national cuisine. When the calls came to stop putting flavorful natural fats in our foods, we just started eating less tasty foods. Now that McDonalds isn’t using Crisco any more (or partially hydrogenated vegetable oil) to cook their fries they now taste greasier and less flavorful than ever. We just keep on eating and get used to it.

But finally the word is getting out that the new Emperor’s Clothes really aren’t there–there is nothing wrong with eating lard and butter–and we can get back to eating celebrated recipes from France in their unmodified glory. In celebration of this we had a Julia Childs dinner where each couple brought a dish. We had French Onion soup, baked spinach, coq au vin, and Boca Negra (black mouth) cake.

We started out with French Onion Soup 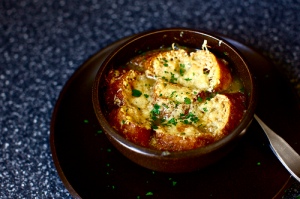 Then we had Baked Spinach 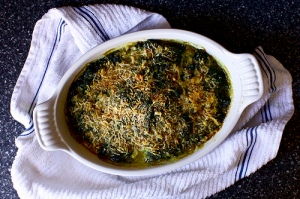 The main course was Coq au Vin (I think, I’ll get back and update this if it wasn’t.) 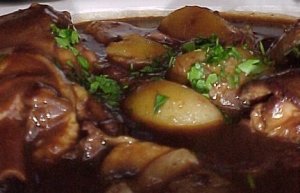 We finished with coffee and Boca Negra cake. 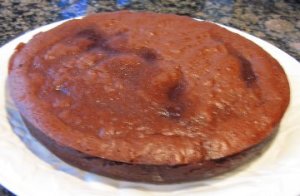 These dishes we calculated contained four sticks of butter. That would be an entire pound. The onions contain carbs, of course the dessert was full of sugar, but most of the energy in these dishes (except dessert) was from the fats that it was cooked in. The French Onion soup was full of caramelized onion flavor from tending to the onions as they browed more and more, topped with cheese and fresh croutons.  The baked spinach was brightly flavored and also topped with cheese. The main course was delicate and buttery, spiced with wine, garlic, butter and mushrooms and garnished with cilantro instead of parsley. Dessert was a cake that contained virtually no flour (1.5 TBS), it was mostly chocolate, sugar, five eggs, a stick of butter and bourbon. Of course it contained bourbon. The french like adding liquors to their dishes. Flavor is the main ingredient in real food. This meal contained loads of flavor in every course.

If we were to suddenly adopt a national cuisine after we are through with the national addiction to unhealthy carbohydrates and low-fat tasteless faire, maybe we could pick French. Their small flavorful fat-filled portions would get us over the cardboard in cardboard meals we eat now.

I am an instrument technician at the electric utility servicing the Kansas City Missouri metropolitan area. I am in the IBEW, Local 412. I was trained to be a nuclear power plant operator in the USN and served on submarines. I am a Democrat, even more so than those serving in Congress or the White House.
View all posts by dcarmack →
This entry was posted in Health, Living and tagged boca negra, coq au vin, french cooking, Julia Child, national cuisine, real food, spinach. Bookmark the permalink.

1 Response to Why Not French!