The Soil and You

Have you heard about Omega 3? It is the good cop to Omega 6’s bad cop. What about sugar, did you know that there are different chemical types of sugars? Do you know the different effect the different sugars have in your body when you eat them? We all know about vitamins, we can name a bunch of them and we might be able to even list foods that are great supplies, in case we don’t have access to the vitamin pills which will give us our daily dose without eating all that food. Finding and naming these things is a growing branch of science.

Back when science was really taking off, especially the life sciences, it was discovered that there is a ratio of nitrogen-potassium-phosphorus that when applied to plants, they really shot up. At first fertilizer was referred to as ‘artificial manure’, and it used to be controversial. Back in the forties a study was done to identify the effect that the soil had on the animal at the top of the food chain, the human. The researcher looked at World War I draft physical exam results for young men of draft age from Southeast and Northwest Missouri. Back then people ate all foods that were grown in their locality, fertilizer had not yet been invented. The soil in Northwest Missouri is rich river bottom soil, and in Southeast Missouri it is the thin mountainous soil of the Ozark Mountains. The percentage of young men unfit for the draft in the Ozarks was much higher than the river bottoms. What effect would it have on us if all of our food was grown hydroponically, what as yet uncatalogued nutrients would we be lacking?

The researcher I am talking about above is Sir Albert Howard.  He was the head of the British version of the USDA. He wrote a book about his observations called “The Soil and Health” which can be found here. It was his idea that there are many things going on in the soil that we don’t understand. He proved that the health of the soil has a direct bearing on the health of the animals further up the food chain. Our health is directly proportional to the health of the soil our foods come from. Plant health is improved when the fertilizers used for them are natural, containing natural bacteria and fungi.

Nutrient discovery has led to the notion that plants for food can be grown without soil at all. Modern hydroponic farming completely eliminates the soil and the things living within it from the production of foods. The plants evolved over hundreds of millions of years to live symbiotically with the bacteria and fungus at it’s roots, much like we have evolved with the bacteria in our digestive tracts passed to us by our families and environments. To raise plants this way would be similar to just raising your children on vitamins.

Research has discovered lots of nutrients that are, in fact, beneficial, and some of them vital for us. Perhaps you have heard the story of sailors on long voyages that became ill before it was known that going without vitamin C was bad for you–way before we knew what vitamin C was. Naming and isolating nutrients led to a field of experts on food components. Throughout recorded and pre-recorded history people have been eating without knowing what the pieces and parts were of the foods that made them good or ‘bad’ for them.

Naming nutrients and classifying them into good ones or bad ones has created a kind of religion, or ideology, if you will. The high priests of nutrition create pills for us to take that contain them. Today it is ‘probiotics’ and ‘omega 3’ capsules. Yesterday it was Flintstone chewable vitamins. Before that it was ‘eat your vegetables’. Classifying bad fats, butter, lard, tallow led to the promotion of ‘good’ fats, margarine, canola, vegetable. Now it turns out that the bad fats aren’t bad, and the good fats aren’t good. Omega 3 is ‘good’ but only if it is in the correct proportion to the Omega 6 ‘bad’ fat, much like the nitrogen in plant fertilizer is only good in the correct proportion to the other elements contained in it. Just nitrogen is bad for plants.

Research is finding that the  best things in our foods are those that are good for the microbes that live within us and help us digest our foods. New science is discovering that the recent proliferation of food allergies are probably related to the modern diet, and may be because the modern diet is not promoting the health of the right microbes in our guts. Doctors are now transplanting feces from a healthy person to a sick person to re-inoculate his bowels with beneficial bacteria that may be missing. Reintroducing the proper bacteria of course would be a temporary fix if the person continued to eat in a way that starved them the first time. 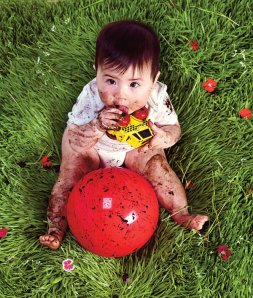 How much of the modern health and weight issues are related directly to the unhealthy soils that our corn is grown in? Raising corn in tighter and tighter quarters at higher and higher speeds is leading to having to amend the soil with fertilizer, having to spray for insects more because the plant does not have time to form its natural defenses to them (perhaps something healthy soil naturally does), and having to spray for diseases that the plants are more prone to (also may be related to compromised soils). Rapidly raised crops and animals are bound to have less beneficial biological material to pass up the food chain to us. This is especially true if they eat the same corn and soybeans that make up ninety percent of our foods. We are all eating the same crops off of the same soils, so the diversity of our diets is limited. Whatever nutrients our gut microbes have evolved to rely on are likewise limited by this. The variety of life within us becomes more narrow, the benefits of their byproducts becomes more limited. Our health changes to reflect the quality of the soil that our corn is grown on.

Just taking the next pill to come along is exactly the wrong approach to take to deal with our worsening health. Omega 3 fish oil is not going to fix the fact that the foods you eat are from exhausted, amended soils. Taking vitamins is not going to improve the diversity of the microbes that help you digest your meals into the actual nutrients required by you to keep you thin and healthy. When they discover Omega 9 oil it won’t be the silver bullet to ‘burn off fat’. Your fat is from your reliance on processed foods in bags, boxes and cans instead of whole foods that you cook or ferment yourself.

If you want to be as healthy as your great grandparents were, you are going to have to start eating like they did. Lard and butter for cooking, eggs and grass fed meats for your omega 3 to 6 ratio, whole foods for your sugars and starches. You can change this all at once, your you can change one small thing at a time.

I am an instrument technician at the electric utility servicing the Kansas City Missouri metropolitan area. I am in the IBEW, Local 412. I was trained to be a nuclear power plant operator in the USN and served on submarines. I am a Democrat, even more so than those serving in Congress or the White House.
View all posts by dcarmack →
This entry was posted in Health, Living and tagged Food ingredients, food science, health, living healthy, losing weight, microbiome, Nutrition, saturated fats, sugar, unsaturated fats, vegetables, weight loss. Bookmark the permalink.