I really don’t hate bacon. I really do hate trying to cook bacon for breakfast before I go to work, though. Bacon is too long to fit on the hot spot in my skillet. The edges don’t get as hot, the bacon overcooks in the middle, under cooks on the ends. I have to cut the strips in half so that I can evenly cook them. I have to plan on about five times as much time devoted to breakfast as what I am now used to. Muesli takes about thirty seconds to get ready. Canadian bacon, because it is precooked takes just as long as eggs to cook, about two minutes. Bacon takes from six in the morning to about six-twenty two. That is actually eleven TIMES longer than Canadian Bacon, and WAY longer than cereal. I love bacon though, but it doesn’t taste so much better than either of the other two that I would choose it.

So, why am I choosing bacon, you might reasonably ask?

I have failed to plan ahead. I need to mix up a batch of Muesli, I am out. I have all of the ingredients except for chopped mixed nuts. That one little stumbling block is holding me up. I have failed to make another Canadian Bacon. This is where making all my own foods is coming back to haunt me. I brine and cure my own Canadian bacon. I have to purchase a pork loin, and I have to brine it for about three days, then I have to smoke it to 150 degrees. This obviously will take days to do, and even more days to do if I don’t go buy the pork. To shorten the wait, all I have to do is just go buy some bacon at the store, but I won’t. I want to control the quality of the pork I use, and I want to control the ingredients in it. On that I won’t compromise.

At some point, the hassle of cooking bacon in the morning will exceed the hassle of making cereal or Canadian bacon and I will get it done. Then I will be back to the carefree days of old, when I could eat breakfast with zero difficulty. Maybe today will be the day.

Here is the recipe for Home Made Canadian Bacon.

Here is the recipe for Home Made Almond Milk.

Here is the recipe for Home Made Muesli Oat Cereal. 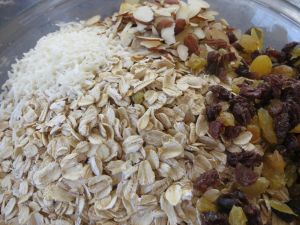 I am an instrument technician at the electric utility servicing the Kansas City Missouri metropolitan area. I am in the IBEW, Local 412. I was trained to be a nuclear power plant operator in the USN and served on submarines. I am a Democrat, even more so than those serving in Congress or the White House.
View all posts by dcarmack →
This entry was posted in Health, Living and tagged Change for the Better, changing habits, diet, healthy eating, living healthy, losing weight. Bookmark the permalink.

1 Response to I Hate Bacon